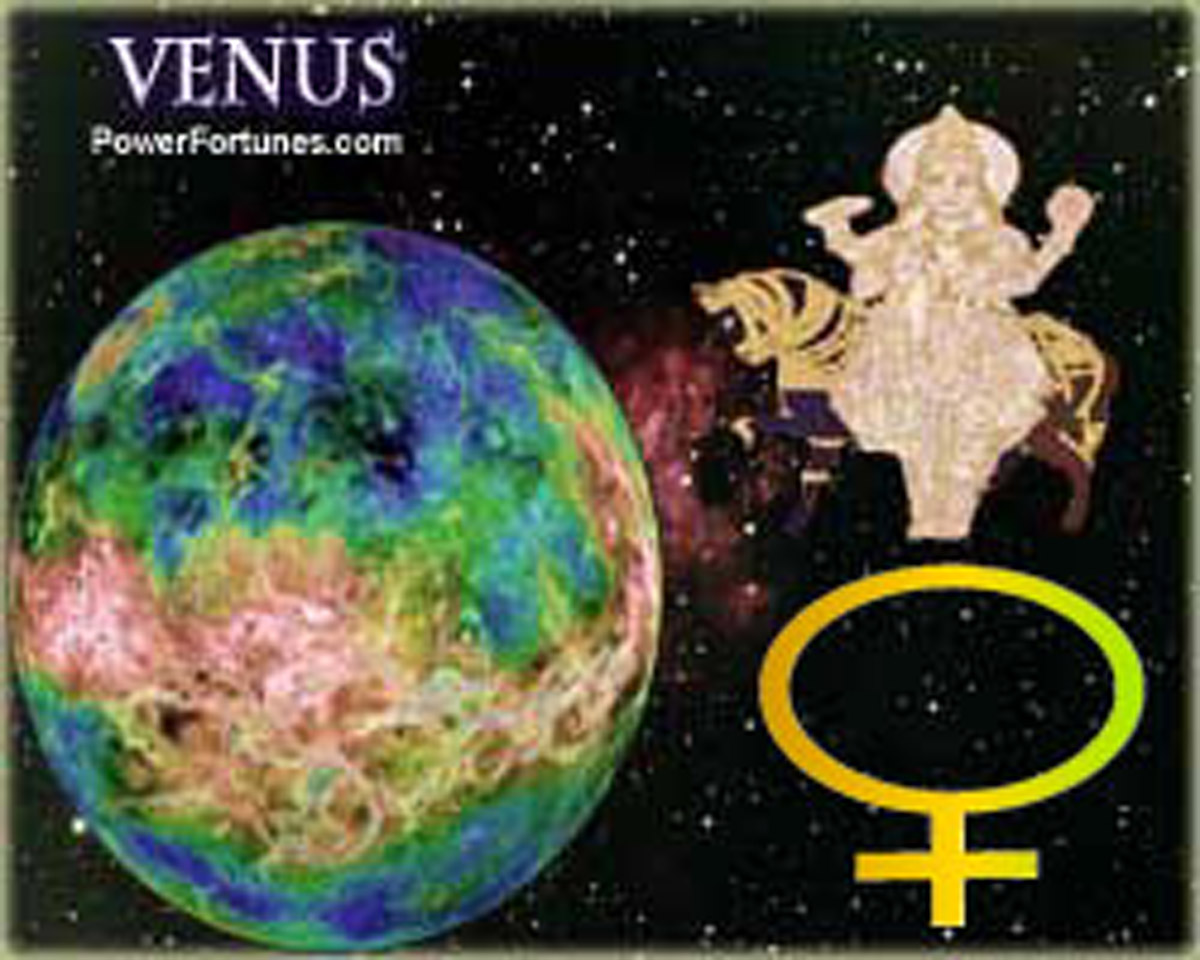 The image above shows an actual
picture, the astrological symbol and
the Vedic personification of Venus.

Venus is never more than forty eight degrees from the Sun and completes it's orbit within two hundred and twenty four days and seven hours. It is a temperate planet, considered as the 'Lesser fortune'.

Those people that an exalted Venus in their natal charts are usually without exception, elegantly formed and physically attractive, with sparkling eyes, a round, smooth face with dimples in the cheek or chin. They usually have a wandering eye, denoting desire, a sweet voice and very engaging demeanour. However, the amount of influence this planet will contribute towards bestowing all the above qualities on the native, largely depends on it's position with regard to sign, house and aspect. For example, if Venus is exalted in the ascendant's house, the native will be endowed with beauty, while on the other hand if it is debilitated to the ascendant or to any of the other planets, not only may the native's appearance be marred, but there may also be character related deficiencies.

Venus, has the effect on the native of make them pleasure loving and somewhat superficial, inclined to go follow the route of least resistance. The native will be unwilling to make sacrifices and do the hard plodding that that may be required in life.

A badly afflicted Venus can cause the concerned individual to be profligate, insolent, shameless, wholly abandoned and open to lust and depravity. However as a rule, people under a strong influence of this planet are mild and inoffensive.

When Venus is the dominant planet in the horoscope, a great deal of good fortune, in the way of favours, kindness and patronage are bestowed on the native. They will also have a fondness for the finer things in life and will wish to acquire worldly comforts. He/she will have powerful friends, who will stand by them and assist in making his life easy and pleasant. Such a person can count among his friends, people of high position or even those holding titles. They will attract kindness and consideration from others. Love will play a very prominent role in the destiny of such people however, the strong motivating force, in the case of these people, is physical attraction hence, when the novelty wears out, there is nothing else to hold the relationship.

Venus rules jewels perfumes, pastel shade in colours and beauty of from both in human life and inanimate objects. For those for whom Venus is the lord of fate, physical appearance and material comforts will be strong influences in their lives. Advertisement
Choose another Planet
Customers Say »»MORE TESTIMONIALS →
Advertisement
We and selected partners use cookies or similar technologies as specified in our privacy policy. Continuing to browse, interact with any link or button on PowerFortunes.com, or by otherwise engaging with any content on our webpages, will be deemed as your acceptance of the terms of our privacy policy.
Page Last Updated on: 2021-04-07
Going Up ⇧